As recently as May Corey Lewandowski sported a sort-of-normally-sized flag pin. Yesterday in front of Congress he literally doubled down, and this new pin's weight is affecting his posture and spine angle. Ease up on the patriotism, Cory! Your health depends on it! 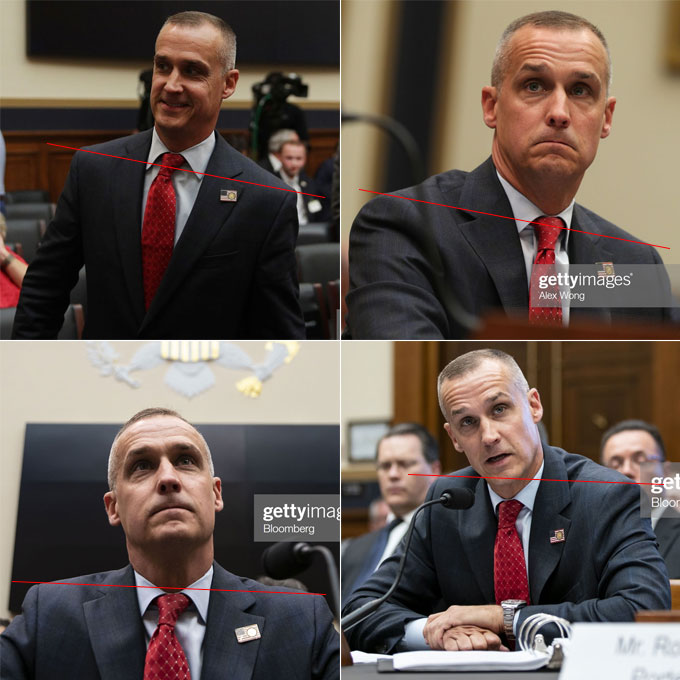 Trump's height claim is as audacious as Levi's and Uniqlo gaslighting us into believing we're a 32" waist.

America, we have found him! The only person on the planet who can make Donald Trump look presidential.

EARLIER: It's John Daly's *pants* that have the drinking problem.

Like most people who don't live in Oregon — and probably most who do — we don't pay a lot of attention to Oregon politics. But Brian Boquist, the Republican state senator who recently persuaded 11 of his GOP colleagues to desert their home state and go underground in Idaho to avoid voting on a climate change bill, has caught our eye.

Boquist's behavior is simply unconscionable — and of course we're talking about his alarming allegiance to mock turtlenecks.

He wears them on the Senate floor, for LinkedIn Glamour Shots, in court, and when threatening to shoot Oregon state troopers. You can bet the farm he's mocking in his Idaho safe house, too. We're not even sure Tiger Woods is so passionate about rocking a mock.

Obviously, Mr. Boquist is a bad legislator and a bad human being. But what does it say about our own humanity if we don't intervene in such an extreme case? Must one see eye-to-eye on everything — or anything — to be the beneficiary of sound menswear advice? Maybe if Mr. Boquist didn't look like such a toolbag all the time he wouldn't act like such a toolbag all the time. If there's anything we still believe in strongly after all these years, it's that clothes make the man.

And let's face it. When co2 levels cross the 450 ppm threshold, even Mr. Woods is going to have to ditch his mock on those really hot January nights.

Thus, in an act of mercy and bi-partTIEsanship, we are reaching out to Mr. Boquist and offering him a lifetime supply of ties. All he has to do is supply the shirts, vote when he's supposed to vote, and not threaten any state troopers.

The classic Negroni is simply equal parts gin, Campari, and sweet vermouth. You can do better.

Quick shake or stir and pour into chilled Martini glass. Garnish with an orange twist.