We've been smitten by this Gucci tiger scarf since we first discovered it in October, 2020.

But at $594 it was too much for a fabric-based accessory — especially one with ever-decreasing wearing opportunities — so we added it to our price tracking app with the hope of future discount alerts.

Maybe it's a little too MB Bold Play for most, or maybe it's just really ugly to most, but over the past year it's stayed in stock and has gone from merely aspirational to MB Deal of the Week. Here's its journey:


As for the scarf itself? About what you would expect from Gucci: fantastic.

EARLIER: 7 Ways to Tie a Scarf Based on the Game-Time Temperature at Lambeau Field

The Giants' World Series victory parade through downtown San Francisco was an alarming if not unpredictable display of brute toolbag power. Like a murderer's row of Jersey Shore extras, one player after the next swung for the fences and knocked good taste out of the park.

Between the "Kiss This Ring" sweatshirts and costume-jewelry title belts, and softball-sized watch faces, we weren't sure if we were watching a victory parade or a runway show for a Flavor Flav garage sale.

Even designated savior Madison Bumgarner did little to stem the rampant tide of toolbaggery. With his backward ballcap and orange garbage bag poncho, he looked like he was wearing a Darth Vader Halloween costume from The Nickel Store.

Luckily, relief finally showed up in the unlikely form of little-used pitcher Tim Lincecum. Though the one-time superstar only saw 1 ⅔ innings of action in the series, during a Game 2 loss to the Royals, his victory parade mechanics were in top form. No team colors? Check. No trash-talking commemorative sweatshirts or visible logos of any kind? Check. Well-tailored shacket paired with an artfully disheveled scarf and what looks to be a cashmere beanie? Check.

Put this guy back in the starting rotation, skip! He's ready to play.

Earlier: 7 Ways to Tie a Scarf Based on the Game-Time Temperature at Lambeau Field

With their covered faces, camo pants, and simple black tees, this strikingly well-coordinated Mahdi Army flash mob almost looks as if they are about to surrender to 2014's most hegemonic force — normcore. And yet note the emphatic gestures of resistance. Fluorescent explosive devices and sweatbands. Skull face scarves. We are astounded that amongst all the upraised right hands, there is not one clutching an iPhone and taking a selfie — because this is the most self-consciously fashion-forward rebel army we've seen to date. When Opening Ceremony decides to get serious about invading the Gap, they know who to call.

It's Week 3 of Monday Morning Quarterback, a feature that combines our love of chronic traumatic encephalopathy-inducing bloodsport (aka, the NFL) with our passion for style.

Our beloved GBP is 8-0 and we'd like to introduce Anna — decked out in a vintage Ashwaubenon high-school Packers cheerlearder uniform — as your guide to scarf tying based on the game-time temperature at Lambeau Field.

Q: Any idea what kind of sunglasses Tom Petty's wearing in this picture? I really like their simplicity.
—Steve

A: We're not sure of Petty's exact make or model, but you can approximate this look with the Allyn Scura Legend — an MB favorite — with brown lenses. These are also favored by Bradley Cooper in the A-Team, and also when he's off camera.

Meanwhile, you didn't ask, but we couldn't help but notice Petty's scarf has a message for our readers. It's saying, "Don't do me like that!"

We know this is a signature look for Petty, but if you ask us, what it says is, 'I've been waiting for the Sundance Catalog to add an ascot page for years, but still no luck. I'll guess I'll use this scarf. And, uh, how do you tie an ascot again? Well, this is sort of close, right?"

Next week, we're posting a scarf-tying guide that will feature 7 ways to tie one. The Petty won't be on the list.
When it's a little chilly on the first tee, we recommend a white cotton turtleneck. When it's downright cold, a cashmere version like this flannel grey Harrison* (on deep discount) should do the trick. When it's snowing, as it was at the Accenture Match Play Championship in Tucson this weekend, we suggest you book a flight to somewhere where it's not snowing and play there. (There are plenty of nice courses in Maui, where it shouldn't start snowing until at least 2013.)

Whatever you do, though, never wear what Martin Kaymer, the world's newly crowned top-ranked player, was wearing this weekend. On Sunday's broadcast, we learned the hideous scarf-like accessory assaulting his neck is a UV Fishing Buff by artist and retired Florida Keys fishing guide Vaughn Cochran.

The UV Fishing Buff is made from Coolmax Extreme fabric and features a black fly fishing lure pattern that we're pretty sure is guaranteed to actually repel oysters and mollusks, not to mention creatures with actual eyes. The only time to wear such a thing is if you're skippering the S.S. Toolbag. Never ever wear one a golf course.

* Harrison's quality is as variable as Bubba Watson's golf swing. Some of their sweaters are our favorites; others barely make the Vietnam Veterans clothing donation bin. Inspect carefully before committing.
Q: This is a question for Spectacular Bitch, but since she's making us wait, like, forever ... I'd like your opinion on what to wear to Lambeau on Thursday night. I'll be in a suite with business partners so a cheese bra is out of the question. Please advise.
--Kelly

A: In lieu of the cheese bra (save that for November 7th against Dallas, when we'll be there) here's an effortless, SB-appropriate outfit for a cool August night:

* BOTTOM: Your favorite pair of designer denim. We like AG if you've got it, Hudson if it's going a little south.

* FOOTWEAR: Sandals, with toes in buff or nude.

This guy is clearly cracking under the pressure. Paired with the right summer blazer that scarf could be magnificent, but accompanying only a polo it's wrong, and this guy's sheepish grin shows he knows it.
I wanted to update you on my efforts to knit the perfect scarf. You were kind enough to obtain the dimensions of the SOH Cashmere Scarf so that I could knit it for my dear son. I found the ideal cashmere yarn and have just finished the last stitch of scarf. My son will be celebrating his 25th birthday on Saturday and this will be a truly fitting gift to commemorate his quarter-century mark.

With sincere thanks, Bonnie

A: That truly warms our hearts, Bonnie. Now, if you enter our MB Cocktail Contest and submit an entry that your son will be proud to order in any bar in America, you will truly be en route to winning Mom of the Year!
Q: My son desperately wants the SOH Cable Hand-Knit scarf, which I absolutely cannot afford. I can, however, knit extremely well. Is there any chance you might know the dimensions of the SOH Cable Hand-Knit Scarf? My son may not be a bastard, but he is absolutely magnificent, and he would be even more magnificent wearing that scarf.
--Bonnie

A: Bonnie, a note of caution: Extravagantly doting on your son is one of the surest ways to turn him into a toolbag. But at least you're not just handing him your Bergdorf Goodman card and telling him to shop until until he gets hungry for a sandwich, which you will lovingly prepare. The SOH scarf is 72" x 12". Good luck and please use only the finest Mongolian cashmere.
At least once in a man's life, he should buy a scarf that costs more than the most expensive suit at Men's Warehouse. We recommend the new 70 cashmere/ 30 superfine merino wool cable hand-knit scarf from new designer Song Oh. It takes more than a week to knit each piece. A Men's Warehouse suit takes like 18 minutes to assemble, tops.

This beauty is available exclusively at Pamela Robbins in Scarsdale, NY. And we also have a handy guide on how to achieve the "lofty wrap" look. 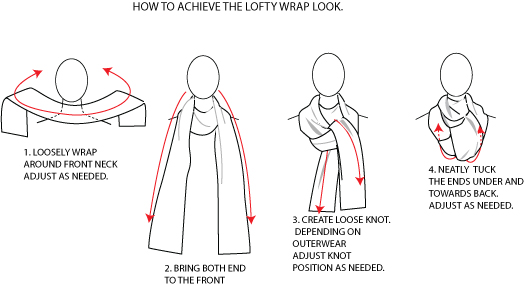 Yes, we've got Bravo on full-time in the MB office, partially because it's The Toolbag Channel. The examples of what not to do are irresistable. Like Slade from Date My Ex. Shiny gold watch, shiny gold ring, and that scarf epitomizes TTH (Trying Too Hard). MBs can safely avoid all three things (and the hand gesturing, too).

Stir over ice, strain into a chilled cocktail glass, and garnish with a cherry.