As everyone knows, Gilligan's Island was a product of liberal Hollywood's fervent Cold War dreams of post-capitalist utopia. On an Edenic island paradise in the South Pacific, an economically and socially disparate group of Americans pioneer a new world where plutocrats, academics, military men, and members of the hoi polloi stand shoulder to shoulder, as one. There are no supermarkets, no banks, no department stores, no fancy colleges, and no churches, just an egalitarian collective of makers collaborating and co-existing in Marxist harmony. The flag of this brave new "nation"? Gilligan's striking, Communist-red shirt.

Given this pedigree, we were surprised, to say the least, to see Glenn Beck, avowed defender of capitalism, selling this emblem of the Red Menace.

Like Jay-Z, Snoop Lion, and many others before him, the professional socialist hunter has diversified into clothing design. His apparel company, the 1791 Supply Co., features t-shirts, polo shirts, caps, DIY quilts, old-timey patches, and selvedge jeans using denim from Cone Mills. Thanks to Beck's efforts, Red State America can now purchase a special edition axe or a small-batch made-in-Portland notebook without ever having to step into a Williamsburg dry goods store.

Most improbable of all, though, is an item Beck is passing off as the 1791 Fox Hunt Rugby. While Beck has added a patch to the shirt that celebrates George Washington's passion for fox-hunting, that's just a smoke screen. Because strip this shirt of that patch, and it is undeniably exposed as the Gilligan, as manufactured and marketed by Columbiaknit. The copy at Beck's site even identifies the shirt's source as a family-owned knitting factory in Oregon that has been making clothes since 1921 — i.e., Columbiaknit.

To further obscure his agenda, Beck charges $29 more for his version than Columbiaknit charges for the standard-issue Gilligan. But can such superficial nods to capitalism really do anything to dull the brilliant red hue of Gilligan's shirt, an ersatz banner to communist ideals that liberal Hollywood used for generations to persuade impressionable children that a collectivist, cash-free, class-less society was the way to go? If you truly love America, boycott this shirt.

Q: A couple weeks back, I got a Blackwater Security polo shirt from a friend of my sister's. It's black with the "bear paw in a crosshairs" logo and the words "Blackwater" on the left breast. I was wearing it ironically for a while, but now, with the congressional hearings and such, I'm not sure if I should be seen in public with it. What's your take?
—BJ


A: Great question. It led us to create the following "Magnificent Bastard Ironic Value Chart." At this point you're better off wearing an O.J. Simpson jersey. May we suggest selling it on ebay and donating the proceeds to the Red Cross? 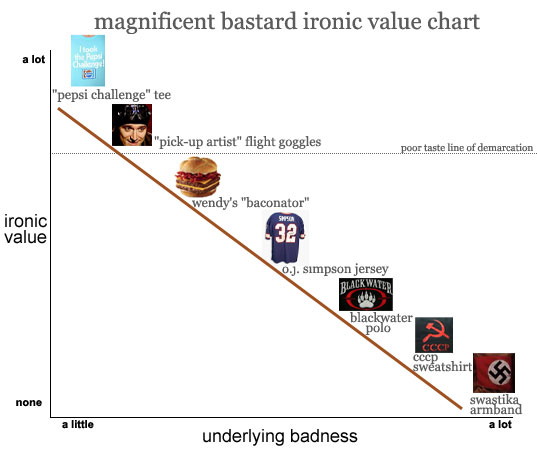 Get 'em while you can still get 'em. John McCain polo shirts, soon to be valuable ironic sportswear.