It's down to 16. Who will advance? This weekend has four games, and we've run all the data through our proprietary algorithm that uses predictive analytics based on a coach's sideline presence to determine game outcomes. Here's what's going to happen, and why:

Gold bracelet. Chunky wedding ring. Ridiculously oversized watch. Between his excessive male jewelry and his "Bring me my goddamned Harvey Wallbanger!" body language, Deschamps looks more than ready to hit the Baccarat table at Caeser's. But at least his lapels are the right size. That gives him a slight edge over Sampaoli who completely undermines pretty good "Are you fucking kidding me?" Jesus Arms with a black blazer over black tee combo that Michael Lohan would be proud to rock at wherever Michael Lohan is rocking it these days. Plus it looks like he might be smuggling a couple keys of cocaine in his shoulder pads — and given recent news emanating from Argentina, that gives us pause.
MB Prediction: France, 3-1.

Uruguay rolled through the Group A like they were all riding on Óscar Tabárez's motorized scooter, but despite sleeve-rolling at near MB levels, look for Portugal to advance on the sheer will of Santos's artful dishevelment and insouciance. He's just not into that cigarette.
MB Prediction: Portugal, 1-0.

"Dress for the job you want, not the job you have" is always good advice, and Spain's Fernando Hierro should have taken it. Instead, the Interim Head Coach is dressed like an Interim Head Coach — a solid performance (minimal accessorization, crest on the blazer) but nothing extraordinary, and the slightly oversized watch makes us wonder if he's truly a long-term fit. In the short term, it doesn't matter, because he's matched against Cherchesov, whose rumpled three-piece suit, black patent shoes, and over-sized ID Badge makes him look like he's head of security for a boy band from Novosibirsk. Sometimes in the World Cup, it's all about the luck of the draw.
MB Prediction: Spain, 2-0.

Obviously, Knockout Phase matches cannot end in a draw, but Dalić and Hareide are pretty evenly matched here, in the timeless and understated uniform of charcoal pants, white woven, black sweater. As far as accessorization goes, Hareide's black-out sunglasses are slightly outplaying Dalic's tie — but whatever advantage that gives him is completely erased by an ID badge that appears even bigger than Cherchesov's. And maybe even bigger than a Denny's menu. We're still debating that here at MB headquarters, but giving the win to Dalic in the interim.
MB Prediction: Croatia, 2-1.

I've decided to take up smoking again because, well, I'm a nihilistic millennial, and was wondering if I could get some guidance on pipe smoking. I was set on a Churchwarden's pipe, as it's distinctive but not predictable and overused like a calabash. I feel it meets the principles of archaism, senseless lack of utility and natural materials, but will it look like I'm trying too hard?

A: Thank you for smoking! We also appreciate your nihilism; your letter has given us a lot to be hopeful for as the holidays approach and we fret about where the world is heading. But choosing a 12" long pipe is the equivalent of a guy who wears extra-long ties.

As A.A. Milne, the author of Winnie-the-Pooh once observed, "A pipe in the mouth makes it clear that there has been no mistake–you are undoubtedly a man." But a 12" pipe is a signal that you really, really, really want to broadcast that message, and even dull-eyed observers will suspect there is some deficiency informing this effort. Don't short-change yourself in this manner!

Meanwhile, we agree on the Calabash; that is purely Sherlock Holmes costume-wear.

As a much better alternative, we recommend a Prince. While lacking the senseless lack of utility of a Churchwarden, it more than makes up for it with its Anglophilia. According to The Pipe Guys, it was fashioned for Prince Albert who would later ascend to the British throne as King Edward VII, and is also accurately identified by TPG as "simple and understated."

Best of luck on your new vice!

Q: Great to have you back! I am attending my office Christmas party and I am to bring a $10 gift. Any ideas?
—Richard

A: If you want something that will appeal to the widest range of potential recipients, our focus group testing has found that virtually all of white-collar America responds positively to a smoking, drinking man-deer who is not afraid to make a nonchalant spectacle of himself at Yuletime.

If you think the booze will be flowing freely at your party, and your 4th quarter performance has been strong enough to withstand a visit to HR, we like this plastic wine stopper from Gama-Go.

If you're lucky enough to work with literate, discerning colleagues, you can't go wrong with Paul Fussell's Class.

We can't make promises for the last two, but if you buy a Non-Denominational Winter Tree Accessory today, it will arrive in time for Friday office parties. (I.E., we ship it USPS two-day delivery at no extra charge.)

Q: Can you tell me your thoughts about the ECigarette?
--Randall


A: Randall, besides being a gross violation of the principle of organic materials, the first time we saw this thing we thought it was a gag gift, on par with fake vomit and fake dog shit. Remarkably it's real (and incidentally delivers a real dose of nicotine). Can you tell how we feel? If not, we've created a useful chart below. 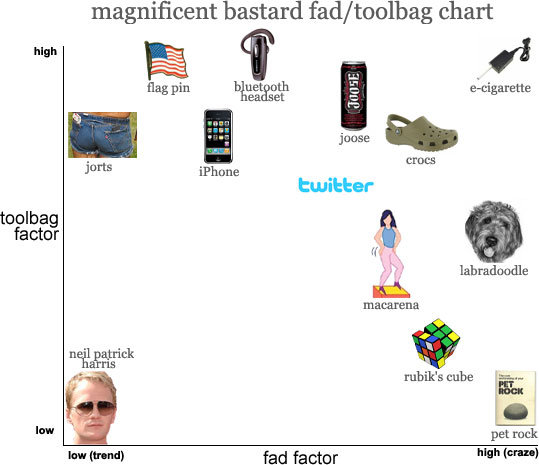 Shake or swirl lightly, garnish with a lemon twist.