Things you should not make out of leather: Jogging pants.

We admit the senseless lack of utility is high here. A pair of leather jogging pants is essentially a sign to the world that says, "No, I have absolutely no intention of jogging today, or ever."

But when we try to picture JFK wearing these things, we can't do it. Paul Newman? Nick Nolte? Steve McQueen? Johnny Depp? Nope, nope, nope, nope — not even Johnny Depp. Jennifer Lopez' fourth husband, a 24-year-old back-up record producer named Ziqué? Yes! Now we are pretty sure such a creature does not actually exist. But his pants do, and these are them.

Q: Wondering what you think about reversible belts like this croc/ostrich one — toolbag gimmick or useful wardrobe expansion technique? Also, that buckle looks strangely familiar.
—Jim

A: At first glance, a belt that efficiently moonlights as another belt might seem to violate the principle of senseless lack of utility. In this case, though, the utility manifests itself in the realm of style. That is to say, a reversible belt doesn't make any claim to hold up your pants better, or provide some other practical benefit. It just multiplies the possibilities of looking magnificent. And that's the kind of utility we can embrace. In fact, we have plans to someday release a reversible belt ourselves.

Nonetheless, while we conceptually endorse reversible belts, there's still the matter of execution. Regarding the belt you've got your eye on, we love the Caiman crocodile side. But we think the full-quill ostrich side should probably bury its head in the sand. In other words, we'd approach this one as a strictly one-sided belt if we were to incorporate it into our wardrobe.

Finally, yes, that buckle does look familiar. Same one we use on our cashmere belts. Good eye!

Once Google Glass hit the streets, we knew it was only a matter of time before monocles experienced a resurgence. It's Newton's Third Law of Fashion: For every action, there's an equal and opposite reaction.

So when some people start wearing computers on their faces, others will move in the opposite direction, donning crippled glasses. Inevitably, the monocle is having a moment. According to the New York Times, the one-lensed eyepiece is a certified "mini-trend."

Is this particular fashion moment one you should take part in? On the one hand, the monocle is archaic, Anglophilic, and even when providing vision correction, characterized by a senseless lack of utility. On the other hand, it's an extreme affectation, a facial prop for men who don't think bow ties are fussy enough.

To help clarify where we ultimately come down on the issue, we've created a new decider. 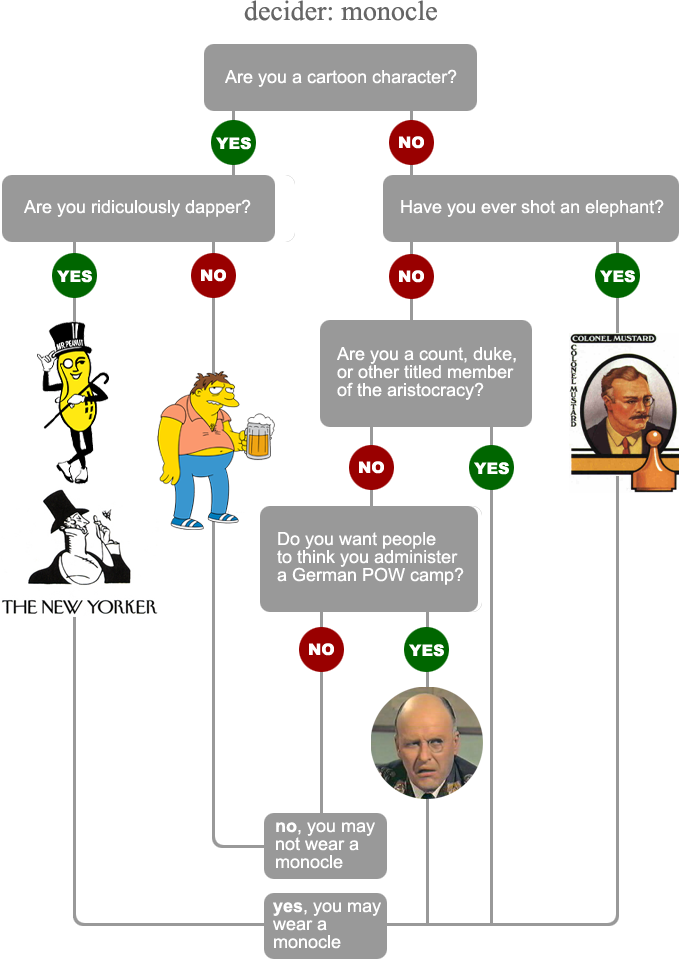 Q: At a cocktail party last night, an acquaintance pointed out that the lacing on my trusty oxfords was mismatched: the right shoe, straight bar (courtesy of the shoe shop) and the left, crisscross (courtesy of me). Before I correct this four-years-old case of absentmindedness, I thought I should consult MB. What is your recommendation for lacing methods, lace type and end length? (And just what is your thought on the bi-color lacing I see in the magazines?)
—Brian

There is a thin line between senseless lack of utility and trying too hard, and it can be found at Ian's Shoelace Site. While we admire attention to detail in unexpected places as much as anyone, we also have a thing for simplicity. Nine out of ten times we do Criss Cross or Display Shoe. With a dressier shoe we'll sometimes mix in Straight Bar, which requires a bit more effort for its streamlined effect but isn't so complicated that we suddenly feel like we're crocheting instead of getting dressed.

Specific lace types depend on the shoe, of course. We like natural laces (cotton, rawhide) over synthetic options, and stay away from any lace that's fat enough to qualify as a skinny tie.

Regarding end length, Professor Shoelace's obsession is instructive here. As his illustration suggests, a 10-inch end length leaves with you a fairly neat bow, and a 12-inch end length crosses into droopiness. For maximum artful dishevelment, we aim for 11 inches.

As for bi-color lacing, we classify that the same way we do dressing up for Halloween: Best left to children and chain-restaurant waitstaff.

Q: The ascot....I am wearing it. It does have a HDD (High Degree of Difficulty —Ed.) but a real MB can pull it off. Your thoughts on this?
—Jason


A: The ascot meets at least four core MB principles:

1. Anglophilia. They were first introduced in England.
2. Archaism. In the late 19th century.
3. Exclusivity. It's nearly impossible to find a good one.
4. Senseless Lack of Utility. They are even more useless than a necktie (i.e. they're too short to double as a belt or decent tourniquet in a pinch).

In other words, we love them.

But can you really pull it off? To answer that question we've created an ascot-wearing "decider" flowchart below to help guide you. 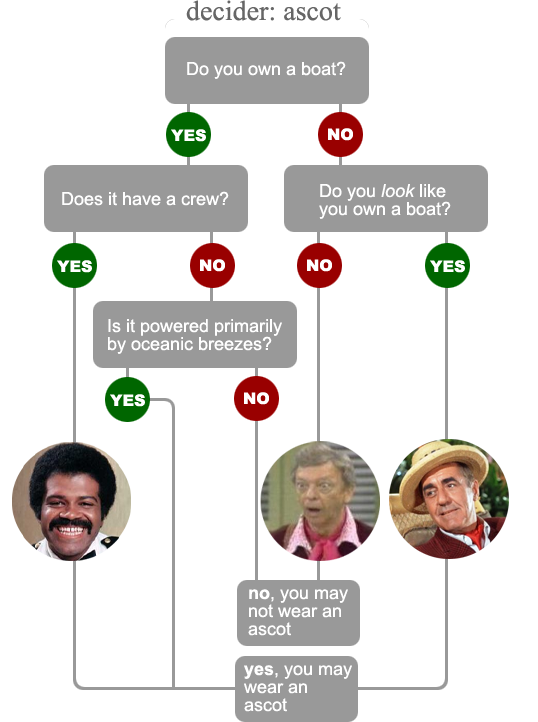 Q: Is it considered MB to wear an animal's entire wardrobe on your head?
—Ev345

A: Well, it's pretty magnificent to be heir to the throne of the fading empire that gave us the Magna Carta and golf, and wearing hats like the one Prince William was wearing this weekend is part of the job description.

As for anyone else? William's bearskin hat is certainly characterized by a senseless lack of utility, and scores high on archaism, organic materials, and Anglophilia as well. But its primary historical purpose — to make a soldier look bigger and more imposing in battle — violates the principle of understatement and essentially establishes the garment as elevator shoes for your head.

As you allude to, the standard hat of the British Foot Gaurds is made out of an entire bearskin. It weighs 1.5 lbs. and, most consequentially, stands 18.5 inches high. Getting in and out of limos and taxis would be a huge hassle while wearing one of these things, so until horseback reemerges as the predominant form of travel, we say "pass."

Stir over ice, strain into a chilled cocktail glass, and garnish with a cherry.