Q: It's been awhile since you guys have talked about classic black shoes to go with any classic suit. Do you guys still subscribe to the semi-rounded Kenneth Cole oxford, or has a decade brought the square toe back?
—Jordan

A: As you imply, it's been nearly a decade since we last addressed this issue. Specifically, in 2008 we created a Shoe Toe Pointiness Chart. While the shoes we were wearing then are long gone, the advice we dispensed remains sound. Indeed, whenever we are moved to produce a chart, it's usually because we are expressing a law that is based in some timeless geometric or mathematical principle of style. Just as gravity persists, so does the aesthetic appeal of a semi-rounded shoe.

Now to the second half of your question: Just because we're right about the correct shape of an oxford doesn't mean society always shares our opinion. And square-toed shoes have been so out of favor, so long, that in an era that celebrates nostalgic reappropriation and contrarianism, they seem like a shoe-in for a renaissance. And yet we still suspect the odds of that happening are only slightly higher than Tiger Woods winning another major anytime soon. 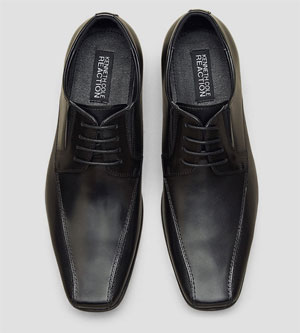 Why? Frankly, we can't recall exactly why square-toed oxfords had their moment in the 1990s in the first place, but our off-the-cuff hypothesis is that their gimmicky novelty was the source of their appeal. Most shoes were rounded or pointed — so square-toed shoes, and by extension, their wearers — were mavericks! Rebels, Macarena-ing to the beat of a different drummer.

But here's the thing: Who wants to present himself as a guy who thinks his best strategy involves steering as much attention as he can to his feet?

Even Kenneth Cole, who pioneered the square-toed vogue, eventually abandoned ship. His site currently shows 280 shoe styles, and only about six — or 2% — qualify as square-toed. And even they are mostly denatured and relatively streamlined descendents of the ubiquitous right-angled clunkers of Cole's heyday, the New York Oxford. Perhaps the one exception is Cole's "Bro-Tential Leather Oxford," which is exactly as awful as its name warns and unsurprisingly marked down from $118 to $79.

Q: I've just bought a pair of grey Kenneth Cole leather oxford shoes. I intend to wear them with long-sleeved shirts in the office. Should I wear a grey leather belt too?
--Mark


A: First, we hope those Kenneth Cole oxfords plot on the proper portion of our shoe pointiness chart. (We're afraid for you, Mark!)

Second, we've never been fans of strict adherence to the belt-must-match-shoes rules handed down by previous generations of MBs, and the gray-on-gray you're wondering about sounds a little too Garanimalistic for our taste. You've essentially opened up the accessory playbook by wearing a pair of gray shoes, which is the footwear equivalent of denim. So while black and brown belts will both work, feel confident in pairing them with just about anything.

Q: Looks like Kenneth Cole finally checked out your shoe pointiness chart. What do you think of these and what would you recommend in a basic black everyday dress shoe?
--Matt

A: Kenneth Cole has definitely taken a roundover bit to a lot of his footwear, but he's still missing the MB mark by a mile. These are too shiny and too clunky for you to wear, Matt. One of our favorite pair of black everyday dress shoes is the discontined Camper Dni, now available only at a German web site Herren Ausstattler for €145. Our freshman German is a little rusty, so we're not even sure if they ship to the U.S. If they don't we recommend these Prada leather loafers. Yeah, they're $460, but trust us that you'll love them, and for an everyday shoe you love, and look this good, $460 is a value. And Saks will throw in free shipping with code SHIPFREE2!
Late last year we took a little flak for dismissing the pants-tucked-into-boots look as TTH. Then in this month's GQ, Kenneth Cole fully validated our call. This look is officially dead. Thanks, Kenneth!
Q: In your recent post on spring footwear, you apparently diss square-toed Kenneth Coles. Then I looked at the STKCs on my feet and said, "Damn! I'm not as business casual as I thought I was." Please elaborate on this thought. Can STKCs ever be magnificent? Are the just too casual to be "business casual?" Or too formal? And how square is square?
--Marc-Ange

A: Let's get one thing straight, Marc-Ange. We did not "apparently diss" square-toed Kenneth Coles. If square-toed Kenneth Coles are Somali pirates, we're the U.S. Navy. No, they can never be Magnificent or Bastardly or any other adjective/adverb worth a damn. For further information and new footwear purchasing guidance, please consult our Shoe Toe Pointiness Chart.

Stir all ingredients over ice. Strain into a chilled cocktail glass.

Magnificent Bastard Cocktail: The Runners Up