Q: I'm a big fan of the site and your store. Keep up the good work.

I would like to hear your thoughts on Trump's cartoonishly-long ties, especially at the inauguration. This is somewhat common for him although he's not consistent, as he will often wear them at an appropriate length. Given his obsession with his image, what messages is he trying to convey with the stupidly long ties? You wrote about this back in 2011 and it'd be great to have an updated analysis. Thanks.
—Andrew

A: Back in 2011 we chalked Trump's excessive tie length up to an attempt to look boyish, like a kid trying on his father's suit.

Now that he's 70, and his face looks like an older, oranger slab of ancient Moab slickrock, we're pivoting from that analysis towards an explanation that's far simpler: obesity.

As Donald Trump loses the battle with his own personal borders and grows squarer and squarer, his long red tie must bear the increasingly heavy burden of creating an illusion of verticality. Note how a tie tied to MB-recommended lengths makes him look even wider.

While Trump's "tiet" is a visually sound tactic, it's risky from an engineering perspective: Trump's ties are now so long they're architecturally precarious. 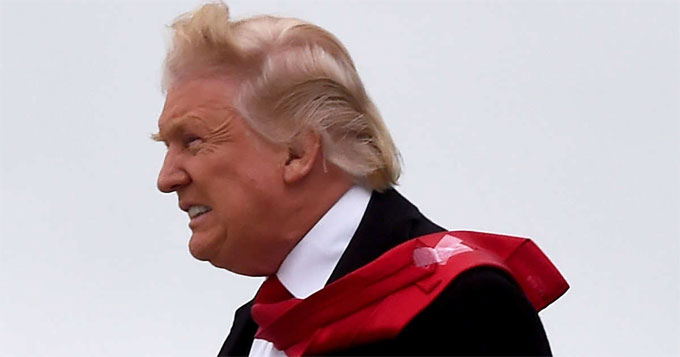 To increase the load-bearing capacity of his neckwear, Trump uses Scotch tape as a kind of sartorial rebar. But how long before such stopgap measures end in catastrophe? President Trump, your ridiculously long ties need stronger reinforcement. It's time to put some of your beloved steelworkers back to work!

Shake or swirl lightly, garnish with a lemon twist.